Despite what is often thought, Anglo-Norman’s influence on English extends well beyond the domains of the court, the law, and towns, with an interesting number of modern English dialect words ultimately being traceable back to the language of the Norman invaders.

Two such are fitchew (“a foumart, polecat”, Mustela putorius), which the 1896 article in the OED derives from “OF fissel”, and mitch v., tentatively associated in the same dictionary with Anglo-Norman mucier (AND’s muscer): “Apparently < Anglo-Norman muscer, muscier, mucer, mucier, muscher and Old French mucier, (chiefly Picardy and north-east.) muchier to hide, conceal (oneself)” (OED article from 2002). Both words, now, are regional. Mitch is so designated in the OED (“regional”) and the sense which concerns us here (“to absent oneself without authority; (esp.) to play truant from school” is described (rather imprecisely) as “now Brit. regional and Irish English”.

Fitchew is not labelled as regional in the OED and it is not listed at all in Wright’s English Dialect Dictionary (1898-1905). In the mid-twentieth-century Survey of English Dialects (IV.5.7) it is only attested in Warwickshire, north Devon and Cornwall. This is a geographically strange distribution which points to the word having once been more widespread; perhaps that is why the OED does not indicate that it is regional, because it was not a regionalism at the end of the nineteenth century, whereas it was by the middle of the twentieth (and it is now probably obsolescent). For its dialectal distribution, see the map in the section of our website for “non-specialist visitors”, and map 108 in Harold Orton/Nathalia Wright, A Word-Geography of England (London, Seminar, 1974). 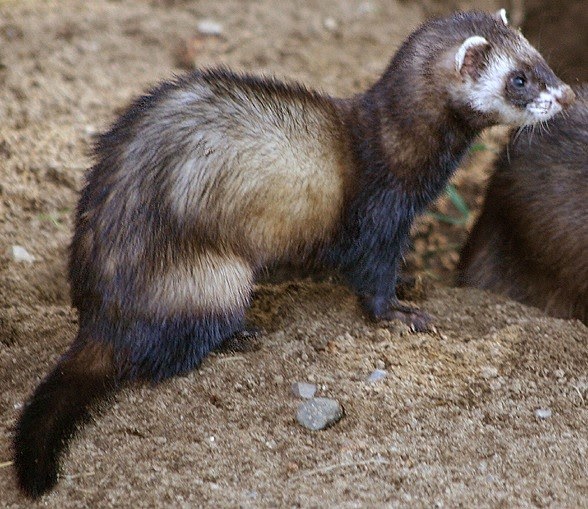 Anglo-Norman has a surprising number of words available to designate the polecat: fitchew, fulmard, foliart, fwyne, putois and mauputois. English has even more names for it: polecat (1320); foumart (c.1400) and a dialectal variant, thummart (1696); fitchew (1418) and variants: fethok (1424); fitchet (1535); fitch (1550); fitchock (1616); martret (c.1450); boussyng (1481); flewen (1494), the last two from Dutch. It is perhaps noteworthy that none of these is attested before 1400. That may just be a documentary accident – polecats are probably not something very often written about – and the range of words available suggests perhaps that if not well documented at an early period, they must have been widely discussed: there would not otherwise be so many words for them.

To return to Anglo-Norman. Foliart may well be a corruption of fulmard (folmard?), itself a Middle English word derived from the Old English *fúl mearð, “foul marten”, and the only attestation of mauputois, in Bibbesworth’s vocabulary-teaching treatise (“E maudist seit li mau putois … ”) is possibly to be read (as the editor, William Rothwell, takes it) as mau putois, “the evil polecat”. But what Anglo-Norman – like English – shows is the retention of words from several languages: putois is from French put, “stinking”, a reference to its odour (the word survives most notably in pute and putain, both meaning “prostitute”); fwyne is French fouine, originally from *fagina (Old French fou, “beech-tree”, replaced in the northern half of France by the Germanic hêtre), and means “beech-marten”, Martes foina.

The marten and weasel families are now distinguished by zoologists, but used not to be. There is a fair amount of confusion which probably goes back at east to Pliny’s Natural History.[1] Old French has two words for weasel: mustele from the Latin, and belet(e), originally a diminutive meaning “fair little one”, which is what the Trésor de la langue française calls a “propitiatory antiphrasis”, i.e. a nice name given to a nasty little animal, in the hope that it will somehow be made to seem (and who knows, become) less nasty. Both mustele and belete are found in Anglo-Norman and so is the one-off diminutive mustelete, in Philippe de Thaon’s Bestiary of c. 1130 (Philippe has a particular fondness for diminutives, especially at the rhyme). Fitchew, the term we are interested in, derives from Latin vissio, a noun meaning “stink”, and it thus obviously emphasizes the smell of the polecat, as indeed do putois and foulmart. Fwyne is in fact the only “neutral” term in Anglo-Norman. The most immediately recognizable French dialectal forms which look like English fitchew are from Picardy in the north-east – and we know that Picard dialect did influence and contribute to Anglo-Norman.[2]

The underlying meaning of fitchew and Anglo-Norman ficheu, referring to the malodorous nature of the animal, is entirely “invisible” in both English and medieval French: in neither language is there any connection with any related word falling within the same semantic field and speakers will be unaware of the etymology or its sense of “stink” (unlike French putois, or English foulmart, where the word contains elements familiar to the modern speaker). Vissio survives only in Gallo-Romance (French and Occitan), and is absent from the other Romance languages. Within France, it covers a range of animals: weasels, dormice, martens, polecats, ferrets. In Virton, close to the French border in Belgium, it can mean a badger. What this suggests is a familiar pattern in pre-scientific medieval languages: a broader semantic range than modern animal taxonomy would regard as acceptable. In parts of north-eastern France (Metz) and Belgium (Mons) the word has an extended meaning of a “wily individual”. Clearly, popular culture associates with polecats, weasels and their ilk, smelliness, malevolence, and cunning. Weasels in particular have various metaphorical connotations in a range of languages including English, Greek and Japanese; it comes as no surprise that they are the baddies in The Wind in the Willows. 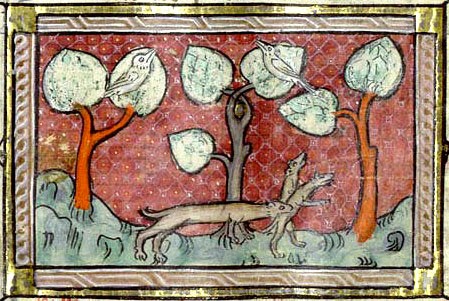 Mitching is an activity which is possibly cunning, though probably not by and large malevolent. It seems to refer quite specifically to playing truant from school and it appears to be (now) quite geographically restricted. It is (for example) in current use amongst schoolchildren in Aberystwyth, but a Welsh colleague says it is not part of her (north Wales) English. The English Dialect Dictionary (mitch vb. and sb.1) says it was (in the late-nineteenth century) “In gen. dial. use in Irel. Eng. and Amer.”. In other words, widely distributed, but recognizably “dialectal”. Quotations for the sense of “to play truant” are given by the EDD from Ireland, Herefordshire, Pembrokeshire, Glamorgan, Gloucestershire, Hampshire, Dorset, Devon and Cornwall. Clive Upton’s BBC Voices project, which asked people to send in words which they use and consider ‘local’, has as one of its concepts to play truant, and mitch features in the ten most common words. The distribution (Choose the theme ‘what you do’ and then the concept ‘to play truant’ in order to generate the map) reflects that of earlier surveys: south Wales, south-west England, and Northern Ireland. The underlying sense of the suggested etymon, mucier, is “to hide”, and it is is one of a number of Old French verbs with that meaning.

The underlying sense of the suggested etymon, mucier, is “to hide”, and it is is one of a number of Old French verbs with that meaning. The medieval language seems to have a wider vocabulary for the concept than does modern French: see, for example, AND’s abscondre, celer3, conceler, tapir, atapir, cuter, acutir …. English mitch used to have a far wider range of meanings than it now does, although attestations before 1500 are rare (one from Gower’s Confessio Amantis, one from the 1440 Promptorium Parvulorum (a sort of dictionary) and one from Wynkyn de Worde’s Dives & Pauper. All these mean “to steal, pilfer”; sources with the core French meaning of “to hide” are not found until 1558 (in a translation of Virgil’s Aeneid) and not until 1580 do we find the modern regional sense of “to absent oneself without authority”, especially from school. So it rather looks as if the reflex of Anglo-Norman mucier found its way into English – and into written texts, only belatedly – with the central Anglo-Norman meaning of “to hide”, before undergoing semantic extension to cover also the idea of “to play truant”. Now, in modern English, that is its only meaning, and only in certain areas. The connection to “hiding” is probably lost because that core sense has fallen out of use, and it is highly unlikely that its French origin in mucier is known to truanting[3] schoolchildren.

Mitch, like fitchew, belongs to that susbtantial number of English words which derive from Anglo-Norman, but from Anglo-Norman words whose French equivalent has now become obsolete.[4] As a result, even English-speakers with a decent knowledge of modern French are unlikely to make the connection between the words they use, and their distant French (or Anglo-Norman) ancestors. Thus is lost not only part of the history of English, but also part of the story of the role, and the extent, of Anglo-Norman as an influence on English.

Some further reading on Anglo-Norman and its influence on English dialects:

[2] There is an interesting parallel with English (now dialectal) urchin, “hedgehog”, for which the closest corresponding French parallel is also Picard, in the form of (h)irechon.

[3] “Truant” is also an Anglo-Norman word, related to but not entirely synonymous with French truand, “petty criminal”. See the AND entry truant.