Word of the Month: The Monoceros and the Unicorn

The Anglo-Norman unicorn is a strange beast. And not only because it never existed. Whereas continental French has both unicorne and the altered form licorne (regarded by FEW 14,42b, and Hope, Lexical Borrowing, 42-43, as deriving from Italian, as a reduction of lunicorno where one syllable is lost, so l(un)icorno became licorno). English has only the one form though licorn is attested in the obsolete (nineteenth-century) sense of ‘old name for the howitzer of the last century, then but a kind of mortar fitted on a field-carriage to fire shells at low angles’ (OED sub licorn). Licornus is not attested in the DMBLS though presumably unicornus will be, as the latter is equally attested in late classical Latin. 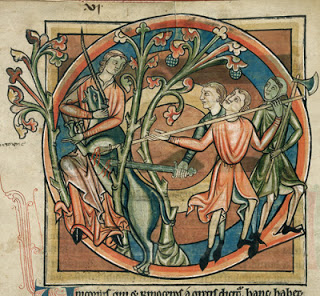 Anglo-Norman however, seemingly only has the one form, unicorne and was used to refer to both the (mythological) unicorn or any (real) one-horned animal, notably the Indian rhinoceros (Rhinoceros unicornis, which has only one horn whereas the African rhinoceros has two). Anglo-Norman equally has the term monosceros, again used to refer to both the unicorn and the rhinoceros. The medieval descriptions of these animals is quite different than what a modern reader might expect: Monoceros i meint en sum, Ke nus unicorne numum: Cors de cheval, chief ad cervin, Piez d’olifant, cue porcin Pet Phil 689 (The monoceros lives up there, which we call a unicorn: the body of a horse, head of a stag, feet of an elephant, tail of a pig) ; Sachez pur voir, seignurs, qe un est rinoceros, E une autre beste est apellee monoceros […] Monoceros est beste, ceo nous dit dan Solins; Il ad pez d’olifant, de corps est equins; E vont cum lions, del chef est cervins. Un[e] corn[e] ad al front, de la cue est porcins Rom Chev ANTS 6812 and 19 (Know for certain, sirs, what is a rhinoceros and another beast called the monoceros … A monoceros is an animal, as Saladin has told us, which has the feet of an elephant, the body of a horse, which moves like a lion, which has the head of a stag, a horn on its forehead and the tail is porcine.)

Medieval descriptions of this (mythological) unicorn, found notably in Brunetto Latini, and including the one above from the Anglo-Norman Petite Philosophie, appear ultimately to derive from the Roman natural historian Pliny the Elder’s Historia naturalis, (Book VIII, XXXI) possibly via the medieval Imago Mundi, a sort of encyclopaedia written in Latin and translated into French. 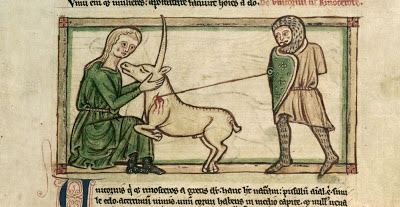 The influential but often wildly uninformed Isidore of Seville, in his entertaining Etymologiæ, distinguishes between the rhinoceros and the monoceros, a Greek word meaning “one-horned” which he translates into the Latin unicornus. The remainder of his account (particularly the reference to the practice whereby hunters use a virgin as a decoy to soothe the otherwise uncapturable unicorn) expands considerably on Pliny’s, and the same story makes its way into Brunetto Latini. It is undoubtedly the basis of much of the medieval iconography of the unicorn, and is linked, too, to a religious interpretation: the unicorn is a Christ-figure, the virgin is Mary, and it is no accident that pictures usually show the beast being stabbed in the side by a spear, as Christ was on the Cross. 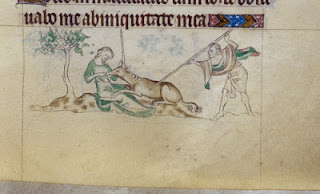 A particularly interesting case is when Marco Polo, en route back to Europe, encounters in Sumatra an animal he thinks is a unicorn (it was presumably a Sumatran rhinoceros) and cannot understand why it is an ugly, dark animal, which doesn’t look like the elegant white unicorns he had heard about (and apparently seen images of). Umberto Eco discusses this story in his Kant and the Platypus, as an example of an attempt to force external reality to conform to one’s mental universe.