Word of the Month: Predire

Do you ever wish you had a way to see into the future, to see how events might play out? The editors at the AND would certainly love to have this ability! As evidenced by a numerous medieval writings, the desire to predict or foretell the future, or predire in Anglo-Norman, has been a longstanding wish of many.

Two of the most recent additions to the Dictionary library are Tony Hunt’s Writing the Future: Prognostics Text of Medieval England (Textes littéraires du Moyen Âge 24, Paris, 2013) and Stefano Rapisarda’s Manuali medievali di chiromanzia (Biblioteca Medievale 95, Rome, 2005). Both of these books contain editions of Anglo-Norman texts which could be used to tell the future – texts to interpret the lines on hands, the meaning of dreams, the zodiac, the moon, the stars…[1] 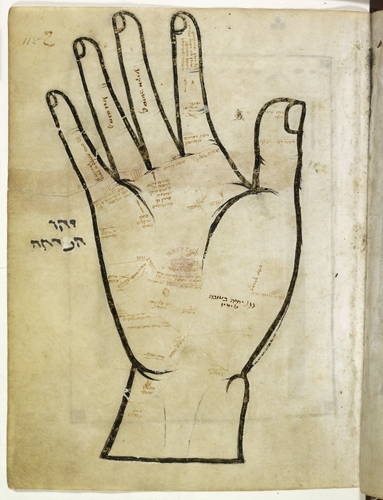 Lunarie, a term attested in another prognostic text edited by T. Hunt[2], refers to a ‘lunary’, a text that provides a collection of predictions based on the day of the lunar month. These lunaries provide a wide range of very practical predictions, including the best time for blood-letting, the fates of children born on that day, the medical prognosis for those that are sick and general statements about the day.

The full moon falls on the 27th this month, and the lunary in Oxford, Bodl. Libr. Ashmole 342 provides this prediction for the first moon:

[The first moon is good for beginning all things, selling or buying. Those who will fall ill, will escape and recover. The child who is born will live to a great age. Worry will turn to great joy. Good bloodletting can happen from a vein.]

While the many prose and verse lunaries do not always agree on their predictions, most seem to agree that the first day of the lunar cycle is a good day for new beginnings. So plan your weekend accordingly!

Prognostic texts based on a combination of the zodiac and the months of the year were also common, and provide information on the fates of individuals born in certain months, under certain signs, with different predictions for men and women (the predictions for women are much shorter). So what is in store for the dictionary editors based on their birth months?

[He will be of regular physical stature. He will have beautiful hair. At some times he will have plenty and at other times not enough. He will have large teeth. He will marry three women and one will leave him without returning. The first children he will have will be female. Those who eat or drink with him will speak ill of him and wish to fight him. When he is 23 years old, he will be famous. He will live to the age of 69 and will die in another land from a sword or a pain in the stomach on a Tuesday.]

A bit of a mixed bag for us both, though we clearly need to line up more marital partners! 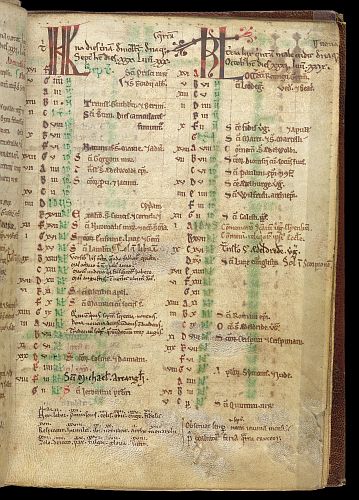 Another series of texts predicts future events based on the day of the week the event or major holidays fall. For example, the text in Oxford, Bodl. Libr. Digby 86 offers predictions based on the day on which Christmas is celebrated. Christmas Day falls on a Friday this year so,

[If it (=Christmas) occurs on a Friday, the winter will be marvellous, spring good, summer dry, August dry. The harvest will be good and plentiful. Knights will fight. Plenty of oil. There will be news between the princes. Loss of sheep and wood. Fridays of this year will be good for beginning things.]

Next year looks like a promising year – Fridays might be a good time to put into action some of the new plans we have in store for the dictionary. The price of oil might go down, but we better not buy any more sheep. 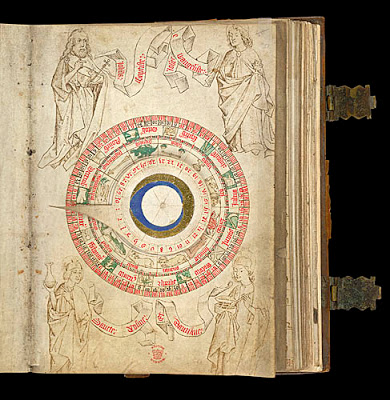 Description from the BL: A volvelle, a device with a moveable disc rotating with a fixed matrix, the pointing moveable index of which could be set at the sign and degree of the zodiac for a particular day in order to predict the best time to provide medical treatment: the moving central part of the volvelle, with the pointer, is inscribed in red with numbers from 1-30; in the concentric circles around this are drawings of the signs of the zodiac, their names, and the names of the months and emblems for the occupations of the months.

Numerous dictionary entries will be improved thanks to these new editions, with new citations to illustrate words such as geomancie ‘the art of divination by means of signs derived from the earth’, or new variants spellings such as maginacioun for machination. Multiple new entries will be created based on the vocabulary attested here: juracioun meaning ‘blasphemous oath’, malageous to mean ‘a sick person’ or soungerie to mean ‘a book of dreams’.

We predict that these new texts will greatly aid our understanding of the uses of Anglo-Norman and may even bring us our first attestation of prediction and prognostication![3]

[1] There still remains material to be edited of this type, which would undoubtedly enrich the dictionary even further. For example, the catalogue entry for BL Ms. 18210 Additional notes that ‘ff. 85-103: Treatises on palmistry (or chiromancy), spatulomancy (the use of the shoulder bone in divination), geomancy and hematoscopy (prognostication by inspection of the blood) in Anglo-Norman French. The texts on spatulomancy and hematoscopy are unique’. These latter texts are not currently edited.