Word of the month: Nice! An Anglo-Norman insult

English speakers may be surprised to learn that the etymology of nice is not very nice at all and that its semantic development is unparalleled in the Romance languages. This word, which style guides recommend that you avoid as it both ubiquitous and nearly devoid of all meaning, has a most complicated semantic evolution.

The word nice is attested quite early in French – ca 1160 and has its roots in the Latin nescius, an adjective meaning ‘ignorant, unknowing’.[1] The word was used in French (and other Romance languages) in Middle English (c. 1400) to disparage people, actions and sayings as silly or foolish. This is the meaning the word retained in the Romance languages, though in French the word is rather uncommon today though you may find it in some older texts to refer to someone as simple or naive, such as those the TLF cites: Un brave homme, un peu nice, appelé Monthyon (Pommier,Colères,1844, p.66)

The semantic development of the word nice in English is a rather complicated affair as its entry in the OED explains as it breaks down the fourteen (!) senses the word has had over the centuries. From the original meaning of ‘foolish, silly, simple’, the word went on to be used with a wide variety of senses: slothful, effeminate, shy, wanton, meticulous. The current sense of nice as ‘agreeable, pleasant’ doesn’t show up until the mid-eighteenth century and has now overtaken all the earlier meanings.

A similar separation of the languages appears in their respective uses of another word to refer to a simple or ignorant person, naif.[2] Naif is derived from the same Latin word nativus that would give us native in English, and nearly all the citations for naif demonstrate this sense of naturalness or nativeness.

English develops several forms of the same word – naif, naïf, or naive – but none are attested prior to the 16th century. They all enter English with the sense of ‘native inhabitant or bondsman’, meanings much closer to their Anglo-Norman counterpart. In English, naive does not develop the current meaning of ‘unsophisticated, credulous’ until some time in the seventeenth century.

One citation from Gower, a medieval writer of Latin, English and Anglo-Norman works, suggests an interpretation for naif closer to the moden usage of ‘foolish, naive’:

trans: More foolish than the prisoner who all day sees an unlocked door, Out of which he could go safely, But does not wish to free himself Until he is led to the gallows.

Surprisingly, natif does not seem to be well attested in Anglo-Norman, despite the fact that the form is found in Old French from the twelfth century.[3] In Anglo-Norman, natif is currently found only in a few late glosses of Nequam’s De Nominus Ustensilium, as a gloss to Latin nativam, alongside the more usual naif, as well as in some late parliamentary rolls with the sense of ‘native inhabitant’ It is the term naif which is used most frequently in Anglo-Norman to refer to the feudal state of bondsman but it is attested a few times from the 13th century, often modified by fol, to mean a foolish person. 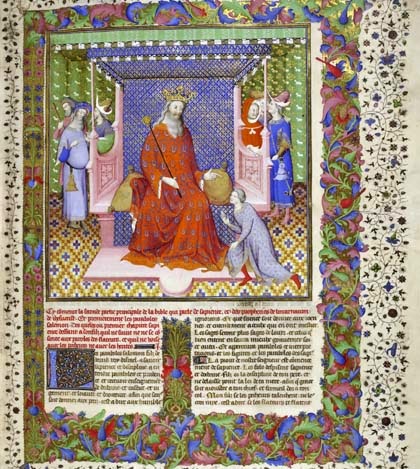 So if calling someone ‘nice’ means you are actually calling that person an idiot, how can you refer to someone clever? In medieval French the term generally used for this was cointe, which could be used to call someone clever, or quick-witted or skillful.[4] It was a fine line however, as the same term was used to call someone crafty or devious – you could be clever, but not too clever! The term is derived from the Latin adjective cognitus, meaning ‘wise’ or ‘clever’ and continues to have a positive sense in Modern French (‘joli, agréable), though it is considered an archaic term.

Cointe was borrowed into Middle English, but you might recognize it under the more familiar form of quaint. When it first entered English, it was used in similar senses to the use in Anglo-Norman, that is, to characterize things that were cunning or clever or skilful. However, it certainly no longer has this sense, but generally connotes something that is pleasingly old-fashioned, a meaning the word would acquire some time in the mid-eighteenth century.

So be careful when addressing a medieval re-enactor! Your ‘Nice job!’ may not be the compliment you intend!