Anglo-Norman tournaments and the thirteenth century

If there is one word that is emblematic of medieval Europe, it is certainly the verb turneier: ‘to joust, to participate in a tournament’. When we think of medieval jousting, we immediately think of the magnificent illuminations in the livre des tournois by René d’Anjou: 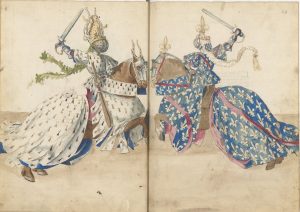 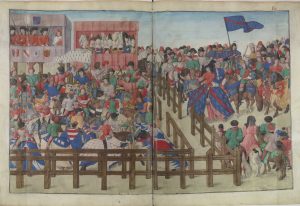 However, in searching for occurrences of the verb throughout the 13th century (as part of the revision of T-, which the AND editors are working on at the moment), I found myself at a loss: almost no text from this period used turneier. At first, I thought I had made mistake: perhaps I had overlooked any attestations during my research? So, I went back to carefully look through the texts of the corpus dating from this period.

This time, I did not come back empty-handed, but with no more than these two results in my bag:

(‘Then he began to joust, without even look at his horse’)

(‘all those who do not stop jousting are to blame, because tournaments are prohibited’)

The word is so rare in our sources that I wanted to find out why this might be. The occurrence found in Le Manuel dé Pechez gave me a clue: What if nobody wrote about tournaments simply because they did not take place and even were illegal? 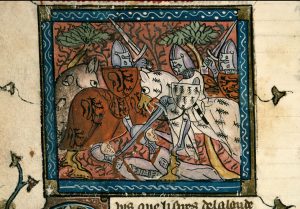 Some research reveals that this was indeed the case! We can find several attempts by the Church to ban tournaments since the 12th century, particularly by refusing to give burial to combatants who had died in a joust and by threatening tournament participants with excommunication. The practice was considered dangerous and a disturbance to public order. Although several canons indicating the prohibition of jousting were promulgated during the 12th century, it is only from the 13th century that these prohibitions seem to have become effective, when various European political leaders supported the Church’s decisions, notably Louis IX in 1260 in France. In England, the practice became highly regulated from the end of the 12th century and tournaments were subject to the king’s authorisation. 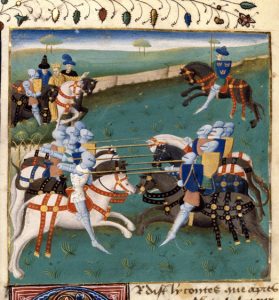 The bad reputation of tournaments and the risk that, in the event of their death, jousters would not be buried in a Christian manner undoubtedly contributed to the disappearance of the verb turneier in the written production of the 13th century in the Anglo-Norman area. The 14th century saw a revival of the practice of tournaments, but in a different form from the melee of the 12th century. The jousts became more courteous, a plaisance, and the combatants no longer fought to the death. And indeed, we see that the verb turneier suddenly reappears in our corpus.