As part of my PhD thesis, I have been researching language contact between Anglo-Norman and dialects of medieval Italian.

The AND currently only has five entries labelled as Italianisms: comyt < It. comito (‘first officer on a galley’); cotegnate < It. cotognato (‘quince jam’); fangot (sub fagot) < It. fangotto (‘a bundle of cloth); sarme < It. sarma (‘a measure of capacity’) and sport < It. sporta (‘a basket’).[1] These words are all found in the same two sources from the city of Southampton: the Port Books of 1427-30 and the Local Port Book of 1435-36, administrative records which list the cargoes of the many Venetian and Genoese ships which docked in the Hampshire port in the early fifteenth century. 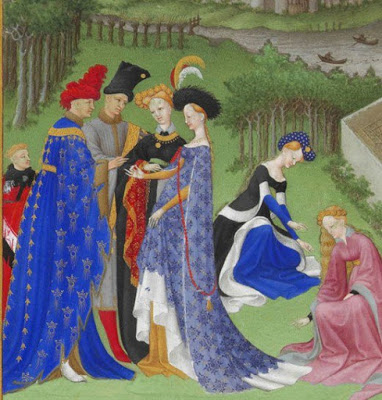 However, my research has found that there is much more evidence to be uncovered of Italian influence on Anglo-Norman. One of the semantic fields that showed numerous potential loanwords was that of luxury and exotic textiles. The English market for silks, brocades and velvets was monopolised by the Italian traders who, for over two hundred years, imported fabric from the Middle East, China and Mongolia. Following the Crusades, the Republics of Venice and Genoa had both become powerful maritime states which established various rival colonies around the eastern Mediterranean, the Black Sea and the Levant: this Italian shipping empire was late medieval England’s only connection to many international commodities. Increasingly, from the 1300s onwards, silks of Eastern origin were manufactured in Italy itself, especially in Lucca (in Tuscany) and Venice. The dense, soft silk type we know as velvet was also invented in the weaving centres of medieval Italy and became one of noble Europe’s most sought-after products.[2] The AND corpus contains many records of purchases of such expensive fabrics, especially on behalf of the Royal Wardrobe: these were of varying thickness, smooth or textured, plain or adorned with gold or silver embroidery: e.g. attaby, baldekin, camaca, damaske, emperial, maramas, ragamas (sub frunt), satin, taffata, tartarin, velvet. The recently completed online database, The Lexis of Cloth and Clothing Project (lexissearch.arts.manchester.ac.uk) gives a very useful overview of the spread of textile lexis throughout medieval British languages and we also find some of these silk names in Latin, English, Scots, Welsh and Cornish.

It seems that the Italians imported not just sumptuous fabrics into England but also words associated with their colour. In many cases, these colours gradually came to be used as cloth names in themselves. This blog focuses on the blue-purple spectrum for which we already have several colour names recorded in the AND: bleu, of course, but also azur, jacinte, jacintin, passe, pers, persan, plunket, purpre,[3] violettez (sub motlé) and, borrowed from Middle English, hawen and wachet. Three blues in particular found in Anglo-Norman texts appear to have close links to Italy. Our first example is ‘sky- / heavenly-blue’ or celestrin, a fabric colour most likely derived from Italian celestrino / cilestrino. Panni celestrini are first attested in the Latin of Rome in 1287 and then in numerous Italian merchant texts form the 1300s and 1400s: see Tesoro della lingua italiana delle origini (TLIO) sub celestino and the Lessico Etimologico Italiano (LEI) sub caelistinum. Some cloth samples of this blue colour from c1402 have even survived, attached to a business letter, in the Datini Archive in Prato, as you can in the photograph below. The textile historian, Lisa Monnas has noted that there was more than one kind of ‘celestrine blue’, citing a Florentine document of 1419-28 which contrasts cilestrino per Roma (‘Roman celestrine’) with cilestrino al modo nostro (‘our celestrine’).[4] 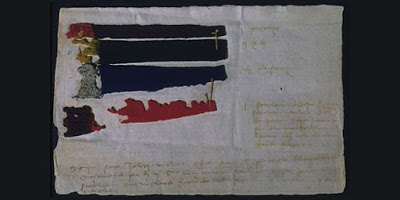 In England, we find the colour / fabric name in Anglo-Norman and Middle English sections of the accounts of the Worshipful Company of Grocers (a London livery company with very close connections to Italian merchants) and, later, in the accounts of Richard III where, coincidentally, it appears alongside another blue cloth name of Italian origin (see OED2 sub turkin): 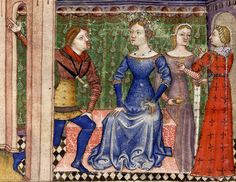 Our second blue – paunace – is not yet found in the AND corpus but will be included when the Second Edition of ‘P’ is published online (early 2017). There is a clear link to Italy in the case of this expensive ‘peacock-blue’ fabric in England, even if the earliest records of its name are found in France (the Old French colour peonace or ‘rouge violacé’ is attested c1172, see FEW VIII, 84a: pavo). The cloth-name appears in the Latin Close Rolls in England from 1208:

and among other prized possessions (such as a cloth of gold and a silk-trimmed coverlet) in the Anglo-Norman wardrobe inventory of the knight, Osbert Spaldington, from 1298:

The ‘peacock’ colour name was only applied to highest quality dyed silks and woollen cloth and by far the most prolific producers of such cloths were the Italians. As Lisa Monnas details, the Venetians, in particular, were famed for obtaining a unique iridescent, purplish colour with tinges of red (paonazzo) by mixing two costly dyes: indigo (see below) and the red ‘grain’ (grana).[6] Compare this cloth description of the exotic cloth cameletto (camelot or ‘camlet’)) which has been dyed in this way, recorded in another English Close Roll from 1252: 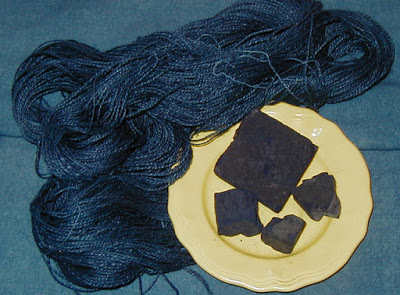 Our third and final blue is an especially exciting find for lexicographers! Indigo dye has been used since ancient times, first extracted from Indigofera tinctoria, a member of the bean family cultivated in India. Once again, it was the Italian maritime states, especially Venice, Genoa and Pisa, who dominated the import of this rare and expensive commodity from their overseas colonies until the sixteenth century (after which the Portuguese, Spanish and Dutch took over).

Indigo is not currently found in the AND corpus. It does not appear in Continental French until 1544, or in English until 1555 (as the dye) and until 1622 (as the colour): see TLFi sub indigo / OED2 sub indigo. In the Middle Ages, the term used for this dark blue in all dialects of French and in Middle English was inde / ynde from the same ultimate Latin root indicus (‘of India’): see, for example, AND sub inde1 (attested c1175), TLFi sub inde (attested c1150), DMLBS sub indicus (attested 9th century), OED2 sub inde (attested 1320).

However, I have recently found the colour yndigo used to describe satin in an Anglo-Norman account written in London as far back as 1440, 182 years earlier than the first OED entry. The text forms part of the Views of the Hosts of Alien Merchants (edited in English translation by Helen Bradley in 2012), a collection of bureaucratic documents recording the imports and exports of foreign (and mainly Italian) merchants in England.[7] The account in question deals with the Contarini family of Venice and it almost certain that yndigo is borrowed from the Venetian indigo /endego, a dialectal form first attested in 1246: see Dizionario Etimologico Italiano (DEI) sub indigo and TLIO sub indaco.

Coincidentally, the first mention of indigo dye in an English-matrix text in 1555 is the form endego, found in a translation of a Venetian geographical treatise by Giovan Battista Ramusio (OED2 sub indigo). As the TLFi and the OED both highlight in their etymologies, Spanish indico and Portuguese indigo must have played a role in the transmission of this dye / colour name in the second phase of its trade history during the sixteenth century. But this much earlier yndigo is an important remnant of Anglo-Italian language contact in the later Middle Ages.

[1] The former Chief Editor of the AND, David Trotter, discusses these loanwords in an article from 2011: ‘Death, taxes and property: some code-switching evidence from Dover, Southampton and York’, in Code-Switching in Early English, ed. by Herbert Schendl and Laura Wright (Berlin: De Gruyter), pp. 155-89.

[5] See Lachaud, Frédérique. 1994. ‘An Aristocratic Wardrobe of the Late Thirteenth Century: The Confiscation of the Goods of Osbert de Spaldington in 1298’, Bulletin of the Institute of Historical Research, 67: 91-100 (p.90).