Word of the month: ‘herds’, ‘bevies’ and ‘sounders’

(This ‘word of the month’ is written by Maud Becker, Ph.D. student and part of the Anglo-Norman Dictionary Project)

Hunting was one of the favourite pastimes of the medieval nobility, and this is reflected in the great number of treatises written, both in Latin and in the vernacular, about hunting in general, and, more specifically, about the fine art of falconry. In about 1079, William the Conqueror decided to designate a large portion of the country as the royal forest or hunting space – what is still known nowadays as the New Forest – much to the frustration of the English, as the following passage of the Continuation of the Brut, illustrates:

When he could rest,

He would take his pleasure

In forests and by rivers.

He was often out hunting,

But as was his opinion

The forests were too small

He wanted to have more game,

And more uncultivated land to breed the animals.

In order to increase the number of game

He destroyed a large region,

That was well inhabited,

With beautiful cities and rich people.

He completely wiped out cities,

And deported all the people,

And gave up the country to wild animals. 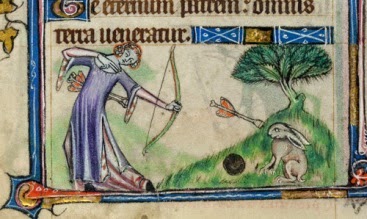 The author refers to wild animals in general by the collective noun salvagin. The word is listed in AND#1 (sub salvagin), but only as an adjective (with uses such as veneisun sauvagine and une beste savaugin). Anglo-Norman, as most languages, has a great number of nouns like this, designating groups both of domestic and of wild animals or game. A good sample of these can be found in the Tretiz of William of Bibbesworth, a mid-thirteenth-century manual on learning French. Bibbesworth talks about a number of domestic animals, and, in the process, provides the collective nouns, for example, trippe de berbiz (‘a flock of sheep’), harras des poleins (‘a harras of foal’), route de beofs (‘a drove of oxen’) and mute des chiens (‘a pack of dogs’). Nouns like these are fairly common both in Anglo-Norman and in medieval Continental French, while some of them have been taken over in English.

When Bibbesworth talks about wild animals, however, his choice of words is a little more noteworthy. Terms like herde, bevy and soundre – used for both mammals and birds – have very few attestations in the Old French language in general. They occur in Anglo-Norman, but, interestingly, are more widely attested in Middle English.

Firstly, the word herde derives from Germanic *herda (FEW 16,198a) and is still used in Modern French and English. In the OED, herd n.1 seems to be used mainly for cattle (e.g. ‘a herd of cows’), whereas in the TLF harde 1 is refers to wild animals (‘troupe (de bêtes sauvages) vivant ensamble’). The medieval languages did not seem to have made this distinction, and the MED herd(e n.1, defines the word as being used for both categories of animals (from a heerde of hogges to a herde off hertes). In the case of Anglo-Norman, the word is attested in combination with deer, cranes and thrushes – as Bibbesworth’s treatise shows:

Firstly, where stags are grouped together

It is called a herd,

And of cranes also a herd

And of thrushes, without ‘h’ ‘erde’

Although Bibbesworth seems to distinguish it, the word without an h is etymologically the same. 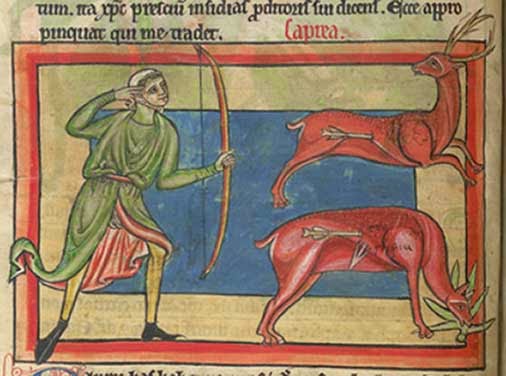 Secondly, Bibbesworth calls a group of herons a bevé de herouns (l. (T) 193). While the same word is well attested in English (OED bevy n. and MED bevey n., though never in connection with herons) this is its only occurrence in Old French (see also TL, 1, 958). In a different Manuscript of the Bibbesworth treatise (5, fol. 143r), the term is also associated with roe-bucks: bewé des cheverols – a use which is also attested in English. The etymology of the word bevy is obscure. The MED suggests a connection with Old French bevée, meaning ‘beverage’ or ‘drink’ (cf. Godefroy 1, 642b). Also Tilander, in his Glanures Lexicographiques, proposed the idea of a transfer of meaning: from ‘a drinking-bout’ to ‘a drinking party’, then ‘a company of drinkers’, and finally to ‘a company of animals’. The FEW (21, 220a) and the etymological commentary of the OED, however, claim that there is no textual evidence to support the theory of such a development and consider the matter unresolved.

The third and last word to examine is soundre. Unlike the other two words, soundre is also attested in Anglo-Norman in early romances – in the Roman de Horn and in the Continuation of the Brut – apart from the more specialized literature, such as the Livre du Roy Modus et de la Royne Ratio (a hunting treatise, probably written by the Norman nobleman Henri de Ferrières). Although the word is rare, the evidence suggests that it too was used both for mammals and small birds. AND#1’s current definition, sub sundre, is simply ‘herd, flock’, which may have to be refined in the second edition. Godefroy (sub sondre 7,473c) defines the word as ‘a herd of swine’, while T/L (sub sondre 9, 835) has the same sense but adds the usage as a collective noun for certain birds: starlings, finches and jays. In Anglo-Norman, the most common association seems to have been with starlings: Bibbesworth lists a sundre des esturneus (G229), and in the Continuation of the Brut already cited, there is a short passage that describes how the future king Henry I picks the starling as his favourite bird, describing it as:

It is a humble and simple bird;

It prefers to fly in flocks

And travel through the land.

At first sight, the same two categories are found in English. The OED includes sounder n.1, which it defines, like Godefroy, as ‘a herd of wild swine’, with most of its citations coming from texts on hunting. The MED (sub soundre n.) also includes the second use (a group of starlings). However, only one of its ten attestations illustrates this use. Furthermore, this particular citation is taken from Femina, an early-fifteenth Anglo-Norman treatise on the learning of the French language, based, in part, on Bibbesworth’s Tretiz. In this case, the attestation is merely a Middle English gloss to an Anglo-Norman main text, virtually repeating the word. It may therefore be argued that only the use with reference to (wild) swine is truly attested English.

The word also appears in medieval Latin in Britain, listed as sundra (DMLBS 3292c) but attested (in a legal text concerning the management of forests) as cindra. Once again its sole use is with reference to swine: de qualibet cindra, id est, de decem porcis, Rex habebit meliorem (‘of every ‘sunder’, that is ten pigs, the king will have the best one’).

It is difficult to trace the development of this rare term and its senses. The Middle English word is attested from the end of the fourteenth century, but it is already present in Old English under the form sunor, with the sense herd of swine – Bosworth-Toll, 937. The gap between the two sets of attestations seems to be too big to confirm that the Middle English word is hereditary, so we could imagine that it has been introduced by Anglo-Norman – where the word is attested since the Roman de Horn. 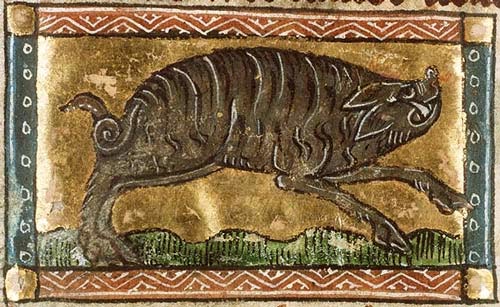 With a close look at the dictionaries, we can see that on the side of Old French, especially in Godefroy and the FEW (17,282b; under the Old Franconian etymon *sunor), sondre is said to still exist as a dialectal word, under the form sonre, from the Champagne region in the north of France, and apparently the manuscripts in which the word is found are coming from Picardy – a manuscript of La chevalerie de Judas Maccabée that is, according to the online Bibliography of the DEAF, a Picard manuscript from 1285 – and also in Belgium – in a manuscript not identified by the FEW. The existence of the word in continental French, apparently mainly in northern regions, is then undeniable but it is still quite difficult to link it with Anglo-Norman, where the word appears earlier. It may be that the lack of continuity between the different languages (Old English, Middle English, as well as Anglo-Norman Continental French) is simply the result of the lack of attestations.

Is the occurrence of the word in the Anglo-Norman language a reminiscence of the Continental word – apparently still present in modern Champagne dialects but not well attested in Old French? Or has it been influenced by Old English – a possibility that we cannot completely exclude, even if it is unlikely? Are we missing steps between Old and Middle English, or has the word been reintroduced by Anglo-Norman? The dictionaries are not giving us enough attestations to understand fully the chronological and/or regional development of the word.

In conclusion, this brief sample of collective nouns that refer to groups of wild animals demonstrates how the rarity of certain terms in Anglo-Norman, even if they are also attested in Continental French, Middle English or Medieval Latin, can cause problems not only in defining them precisely but also in tracing their etymological roots. There is still for many words a lexicographic gap to fill in and perhaps a further examination of the word could give us the answer.